Designing to prevent failure in plastics 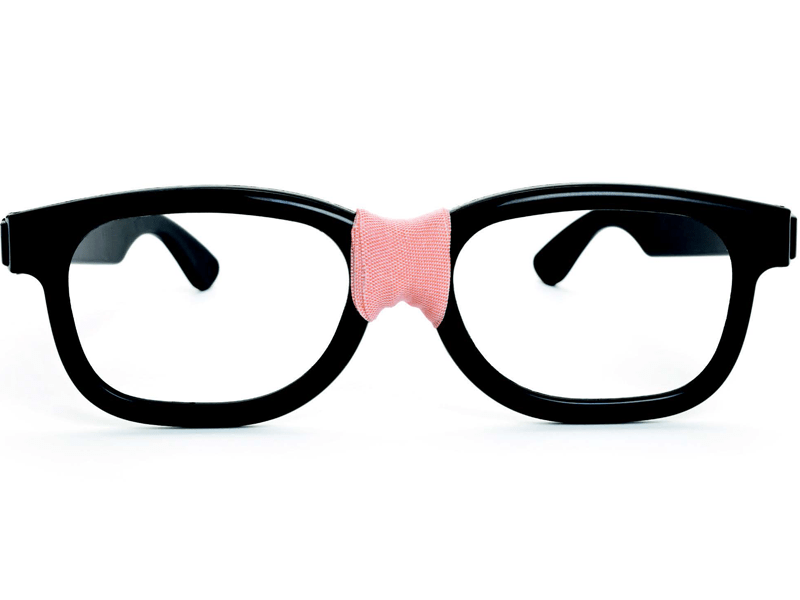 In addition to the right design, correct material selection in plastic products is a critical factor in eliminating the chances of expensive warranty claims and recalls. From our experience, failures are commonplace where the material appears to no longer perform its primary function.

Over 5,000 plastic product failures have been undertaken by Smithers and these have been classified to highlight how and why failure occurs. The primary failure modes are shown in Figure 1, although, it is common for a combination of effects to contribute to a failure. Looking at Figure 2, we can see there is also a human factor involved, with 45% due to material mis-selection and poor specification.

A lack of awareness and understanding of plastic properties leads to poor specifications being drawn up and incorrect material choices being made. When considering the design and development of a plastic component, it is imperative that designers and engineers take into account the fundamental behaviour of plastics, i.e. plastics are non-linear, visco-elastic materials and their properties are dependent on time, temperature, stress and chemical environment. Over time, a plastic will both physically and chemically age, and become susceptible to chemical attack, environmental stress cracking (ESC) and weathering. Often as a material ages, a step change in behaviour can occur, rather than a progressive decline. Without the relevant data this can be difficult to predict.

When, not if, will it fail?

When a plastic is subjected to a constant or cyclic load it will eventually fail. The rate at which the failure point is reached is reduced by increased stress or temperature (or both). Other contributing factors to consider are the specific environment and cyclic loading. If that is not complicated enough, designers also need to know that geometry and processing can play an important role in failure. Features causing notches or weld lines result in points of weakness, particularly in fiber-reinforced materials. In fact, the inclusion of any form of filler or additive is likely to have some form of detrimental effect on a material. Plastics can show mechanical anisotropy due to the alignment of fibre reinforcement. With effective design and material selection, there is confidence that the time to failure will be at a point where it is at least outside the guarantee period, or far in the future.

To effectively approach material selection, the basics of polymer structure and polymer properties must be considered.

Designers and engineers historically have worked with metals and other materials which exhibit a predictable, linear elastic stress-strain relationship over a wide temperature range. However, the visco-elasticity of a polymer means they respond to stress as if they were a combination of elastic solids and viscous fluids. Hence they exhibit a non-linear stress-strain relationship, and as a result their properties depend on the rate of loading and temperature.

When using simple stress calculations or finite element analysis (FEA) to determine the stresses and displacements in elastic materials such as metals, the modulus (stiffness) and poisons ratio of the material will be used. For metals, designers and engineers can rely on instantaneous stress-strain properties, and for most applications can disregard the effect of rate, temperature, environment, and long-term effect of load. Conversely, most plastics products are designed to last more than a minute or so (the average time it takes to generate a stress/strain curve with a tensile machine under standard conditions for data sheet values). Plastic products commonly have to serve for 20 years under load, at temperatures above 40°C in a chemical environment. Consequently for plastics, simply inputting tensile modulus in the FEA program at 23°C will guarantee that the product will be under-designed, since the apparent modulus at 20 years may be significantly lower than the instantaneous modulus value. Furthermore, the stiffness at 40°C may be significantly lower than that at 20°C. Subsequently, the inappropriate use of short-term data can result in premature failure.

Many applications for plastics are for metal replacement components and the design requirements are becoming more arduous with the operating environment having higher continuous operating temperatures and more aggressive chemicals.

What is the worst that can happen?

In order to avoid over-estimating the performance of a plastic, the long term properties must be considered. Properties such as creep rupture strength and creep modulus must be determined experimentally under the worst-case-scenario operational conditions. These conditions should include maximum service temperature, maximum stress, and effects of environment.

Creep is the continued deformation of a material over time under a static load, and is a function of the viscous nature of the polymer. All thermoplastics will exhibit significant creep properties. The advantage with metals is that; in most cases, this value will not change over time at normal operating temperatures. For plastics, creep means that dimensions will change with time causing fixtures to become loose or closures to leak. Over longer timescales the effects can be more dramatic with, apparently unforeseen, brittle rupture of a part occurring at stress levels well below yield and even lower than the design limits with a safety factor.

Cyclic loads can also have dramatic effects on the behaviour of a polymer, with sudden transitions from ductile to brittle behaviour occurring after a number of cycles as shown in figure 3. These transitions can be influenced by temperature and the operating environment. Often the source of cyclic loads is overlooked, for example, daily temperature cycles causing expansion and contraction.

Figure 3 - The danger of using the short-term data 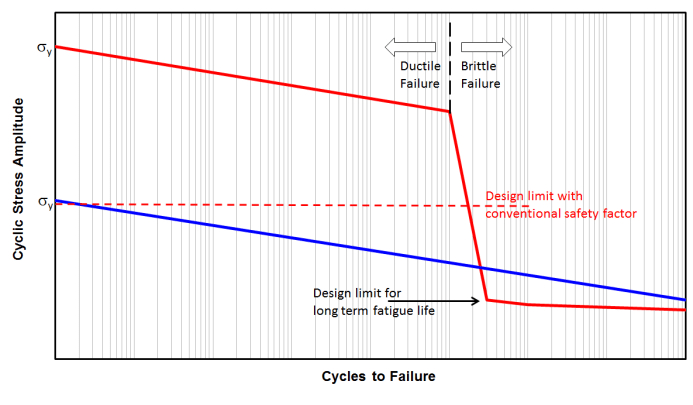 Here the red material appears to have around twice the yield strength of the blue, based on the instantaneous properties. However, it is a very different matter when the materials are subjected to long term cyclic loading. The red material undergoes a dramatic transition and its fatigue resistance suddenly drops below that of the blue material. Therefore, conventional design limits cannot be applied for plastic materials.

Designers and engineers must be aware that datasheets are not produced to provide information for engineering design and final material selections. The datasheet information is normally derived from short-term tests and single-point measurements that do not take into consideration the effect of time, temperature, environment, and chemicals. Also, test pieces are simple standard shapes that are moulded and tested under ideal conditions, in reality this is rarely the case. It is also worth remembering that datasheets are primarily used as a selling tool for the material and important data which highlights potential drawbacks of a material are conveniently left out.

Designers must also be aware of other effects such as environmental stress cracking (ESC). With ESC, the presence of both a stress and the chemical environment can lead to dramatic effects i.e. catastrophic brittle fracture. Such effects are not seen in typical chemical-resistance testing where unstressed specimens are immersed in a chemical for a time period with a simple measurement of properties before and after exposure (again the effect of time and temperature are overlooked).

If failure occurs during service, the costs in terms of implementing solutions and lost sales can be significant. There are constant news stories of product recalls resulting in huge losses and embarrassment for companies. It is estimated that there are around 200 safety related automotive recalls every year. With total costs in some cases being several hundred billion dollars, it’s no wonder that OEMs are now forcing this liability onto their supply chain. This could potentially put some of the smaller suppliers out of business. This is all the more reason to ensure that effective specification and material selection is carried out in conjunction with relevant testing and validation.

Find out more about our polymer testing and life prediction and aging services.