Damage to surface coatings and printed materials can occur during shipment, storage, handling, or by the end user. This can result in significant degradation in product appearance, corrosion resistance and legibility of the product information. The durability of variable data printed on labels or packaging is very important for medical device and pharmaceutical products in particular.

Rub is the process of moving one surface in contact with another. This can lead to abrasion (wearing away of, or deforming the surface), smudge, scratch (breaking through to the surface) or mar (deformation that does not break through).

The complexity of wear processes has led to the development of numerous standard test methods and test apparatus. Correlation between these methods is not generally possible as each employs a different rub or abrasion technique, although materials are often ranked similarly. 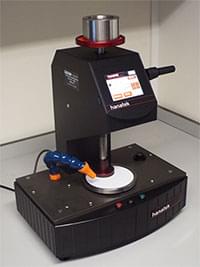 The Smithers (PIRA) Rub Tester rubs two surfaces against each other (face-to-face) in the same plane, at the same speed, under a constant rubbing pressure. The rub test equipment used by Smithers supports with the evaluating the rub resistance of labels and general printed matter, and can also be used to evaluate color transfer from printed or coated surfaces during rubbing.

Commonly used to determine the amount of scuff or abrasion damage associated with transit shipment, storage, or handling of printed packaging. 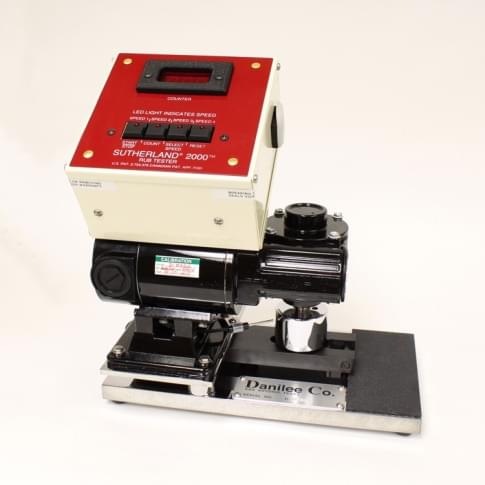 Sutherland Rub Test is performed by attaching a label to the device while a similar sample label is attached to a weight. The two samples are then rubbed against one another at a controlled speed for a predetermined number of cycles. In contrast to the rotary Smithers Rub Tester, the Sutherland Rub Tester employs a reciprocating arc motion, which gives an essentially linear, directional action. On completion, the samples are visually inspected to check for ink transfer.

The Taber Abraser is primarily used to evaluate the resistance of surfaces to rubbing abrasion. Specimens are mounted on a rotating turntable and subjected to the wearing action of two abrasive wheels, which are applied at a specific pressure. The severity of the test can be altered by using different wheels under different loads. The end point is either a visual change in appearance or a weight loss associated with material removed by abrasion.

Tappi Standard T476 covers the abrasion loss of paper and board 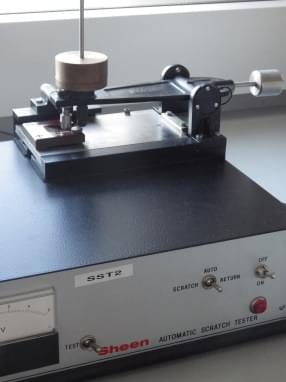 A test panel is withdrawn under a constant weighted 1mm tungsten carbide ball-ended needle at a speed of 3.4cm/second using a Sheen 705 mechanised Scratch Tester satisfying the requirements of BS 3900 Part E2 1992/ISO 1518 1992. Failure of the surface coating is examined visually and by electrical surface resistance when the underlying substrate is electrically conductive.

Coating failure under a given needle profile/weighting is related to coating-substrate adhesion, mechanical properties of substrate and coating, coating thickness, internal stress in coating and friction between stylus-tip and coating. The practical scratch adhesion value of a coating is defined as the lowest critical load at which the coating fails. 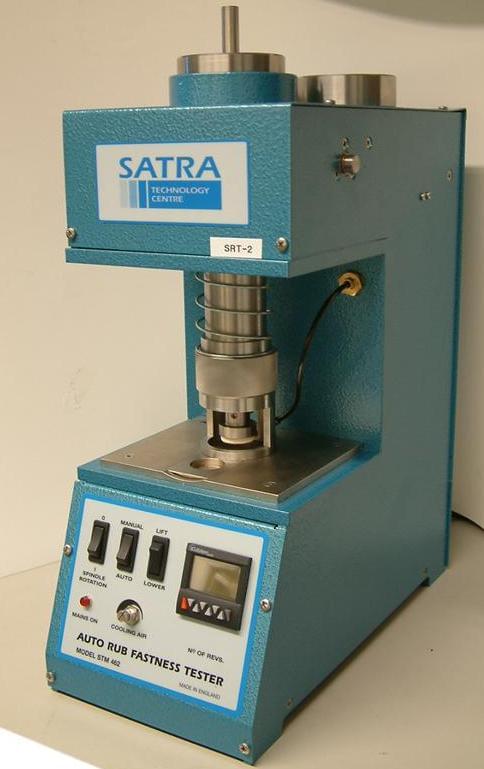 The Satra rub tester is a circular rub fastness tester which can also be used for testing the rub/abrasion resistance of inks on printed films, such as plastic carrier bags, under dry and wet conditions.

The machine has a rotating head holding a circular felt pad which is applied to the sample under a defined load.

The rub or abrasion resistance is determined by the extent of damage to the sample material or by the extent of color or print transfer to the felt pad, using a standard scale where necessary.

The felt pad can be soaked in a variety of solutions to determine the wet rub resistance of the sample material.

The Crockmeter is used to assess the transfer from the surface of colored materials to other surfaces by rubbing. The machine takes its name from the term 'crocking' meaning the transfer of coloring matter or other substances from the test sample to a wet or dry cloth rubbed against it under the action of an artificial finger.

The Crockmeter is used in testing against ASTM F1319 and International Standard ISO 105-X12.